Amazing People : Cold Proof Man : Wim Hof is a Dutch-born man with the incredible ability of being invulnerable to cold, which he has proven by swimming in ice cold water and being buried completely in ice. He climbed up Mount Everest in a goddamned pair of goddamned shorts.Researchers finally got curious and decided to test Hof, and amazingly, they found that he can actually control his autonomic nervous system and immune response through concentration and meditation. 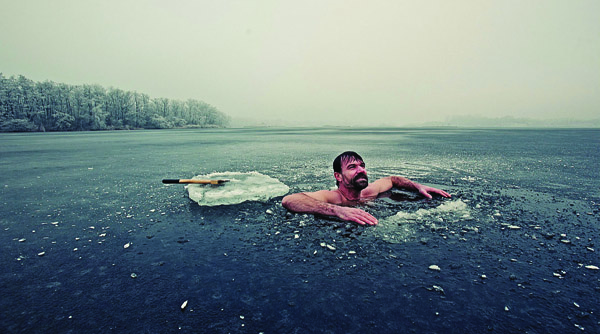 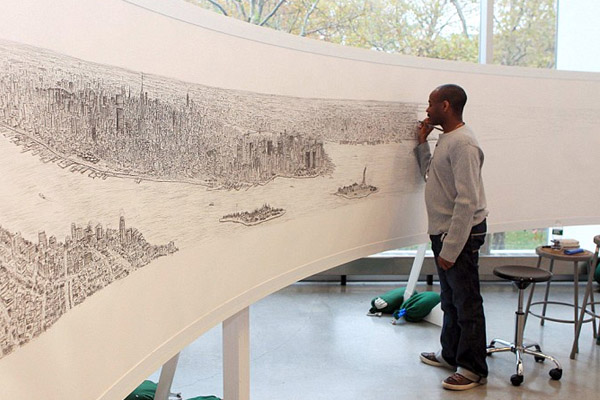 Stephen Wiltshire can look at a city once and draw it from memory. So can we, big deal. The thing is, Wiltshire's drawing will actually look like the city, with every single building in its exact place and perfectly sized in proportion to real life. Buildings, windows, arches, doorways -- almost every detail is precisely correct in size and placement.

A Jedi in the Matrix 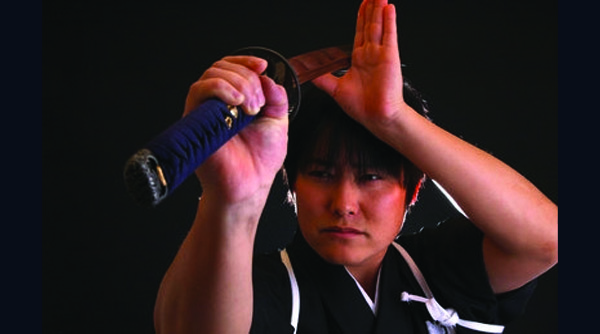 Isao Machii has an ability to process things at a completely different sensory level. So rather than see a bullet moving through the air, for example, he can anticipate where it is at that precise moment. Using his Katana he chops things out of the air for people’s entertainment. He can also be found on Youtube plucking airsoft pellets from the air with his sword. 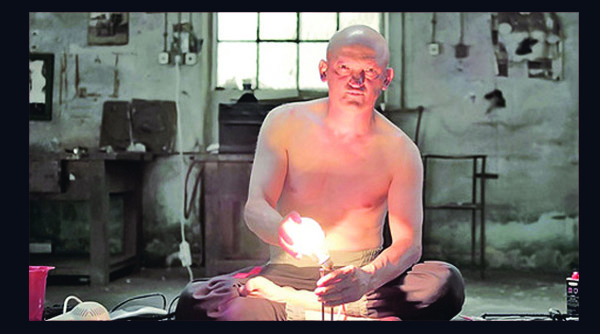 Slavisa Pajkic has set a number of world records for various astonishing abilities he seems to possess. He first realised he was gifted when he was unable to feel an electric current running through a live fence (which for some reason he touched). Regardless, he can cook sausages using only his hands, conduct 20,000 volts through his body without frying and can heat a cup of water to 97 degrees Celsius in well under two minutes. 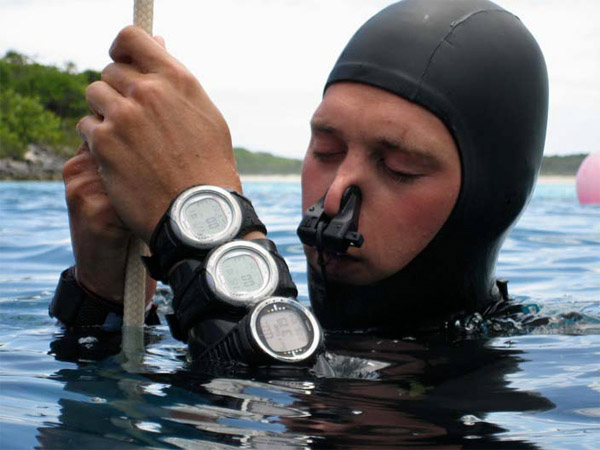 Kiwi Dave Mullins much like many of the others, holds Guinness World Records for what he is capable of. He not only has records for amount of time spent under water, but also total distance travelled. Being able to swim under water for 4 minutes and 2 seconds and travel as far as 244 meters would really take some doing, and that is what he does with just one breathe. 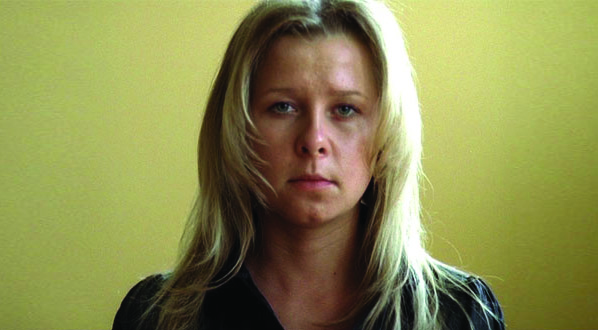 At age 10, Natasha Demkina developed the ability to detect the location and condition of her mother’s organs using only her eyes. Since then she has successfully detected cysts, ulcers and cancers in those who showed up at her door asking for health checks. When taken for a check-up at the hospital, Natasha even told the doctor about the scars on his body he’d attained from a car accident, that no one else could see at the time. Pretty impressive. 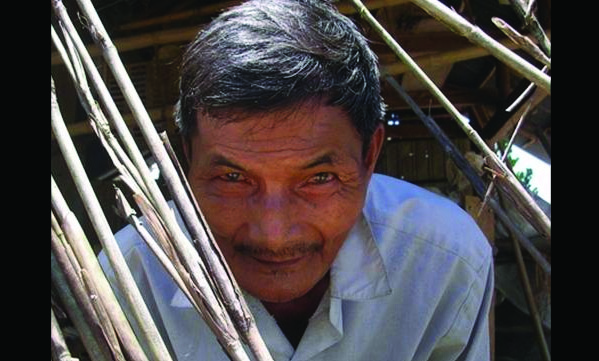 Although there are a handful of people from around the world who don’t sleep, Ngoc Thai is probably the best at it. At the age of 31 Ngoc Thai came down with a severe fever and has not slept since. That means he hasn’t slept since the 1970's. His condition does not affect his physical nor mental health and doctors say he is completely healthy besides a slightly damaged liver. No matter how many sleeping pills he takes nothing can put him down. 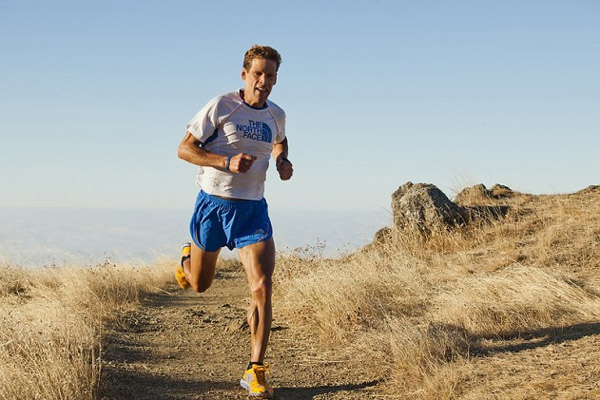 Dean Karnazes is an American long-distance runner capable of inhuman feats of endurance, such running 50 marathons in each of the 50 states ... in 50 consecutive days. Which he totally goddamned did. He's run a marathon on every continent twice over and run 350 miles nonstop over three sleepless nights.

Mister Eat it all 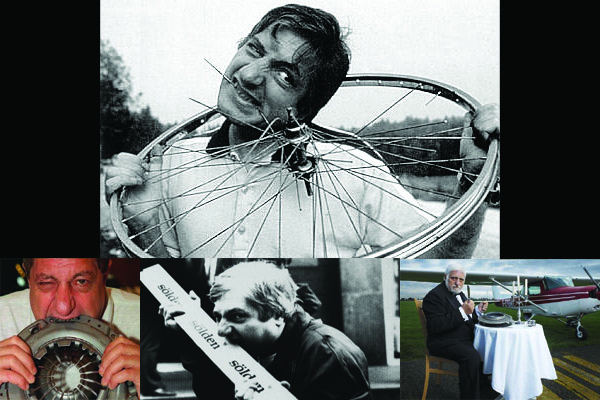 Michael Lotito is known as ‘Monsier Mangetout’ which means ‘Mister Eat-it-All’. He possesses a stomach and intestine with walls twice the thickness of a normal human and his digestive acids are extremely powerful. He has eaten bicycles, glass, rubber, television sets as well as holding the Guiness World Record for eating a plane (which took 2 years) by simply cutting the items up and consuming them with oil and water. 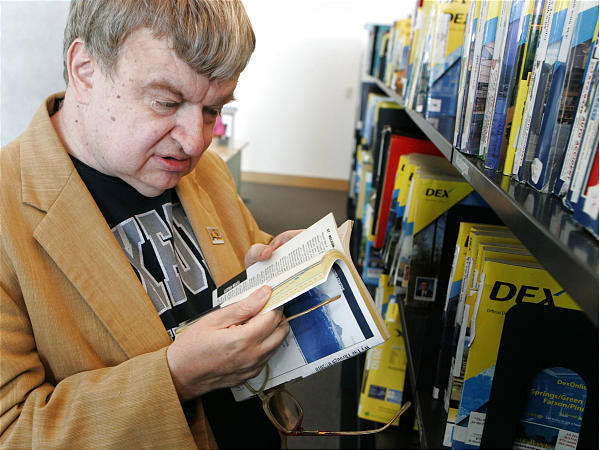 Kim Peek died in 2009, but by this time he had perfectly memorized 12,000 books. He had become so good at memorizing information that he could read two pages at a time using one eye for each page. He is said to have had the best example of an eidetic memory/photographic memory and he could recall 98% of everything that he ever experienced in perfect detail. His story was the inspiration for the movie Rain Man, although he believed using his abilities for things such as gambling to be “unethical”.

The Boy with Sonar Vision 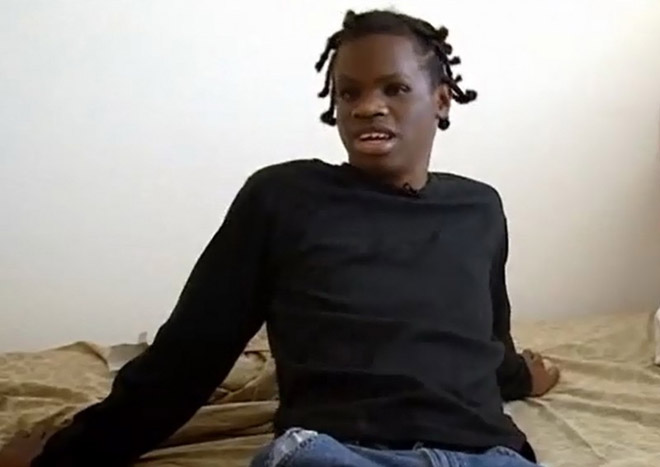 Ben Underwood taught is blind, both of his eyes were removed (cancer) when he was 3. Yet, he plays basketball, rides on a bicycle, and lives a quite normal life. He taught himself to use echo location to navigate around the world. With no guide-dogs, he doesn't even need hands: he uses sound. Ben makes a short click sound that bounces back from objects. Amazingly, his ears pick up the ecos to let him know where the objects are. He's the only person in the world who sees using nothing but eco location, like a sonar or a dolphin. 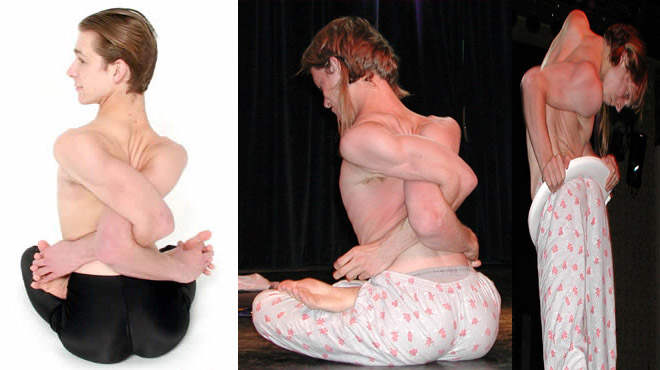 Five time Guiness Record holder, The Rubberboy is the most flexible man alive and the most famous contortionist. He has been in many professional basketball or baseball games and on The Tonight Show with Jay Leno, ESPN's Sports Center, Oprah Winfrey, Ripley's Believe It or Not, Cirque du Soleil, Best Damn Sports Show Period, The Discovery Channel, Men in Black 2, HBO's Carnivale, and CSI: NY and American got a talent. He dislocates his arms to crawl through an unstrung tennis racquet. He performs contortion handstands and unique acrobatics. 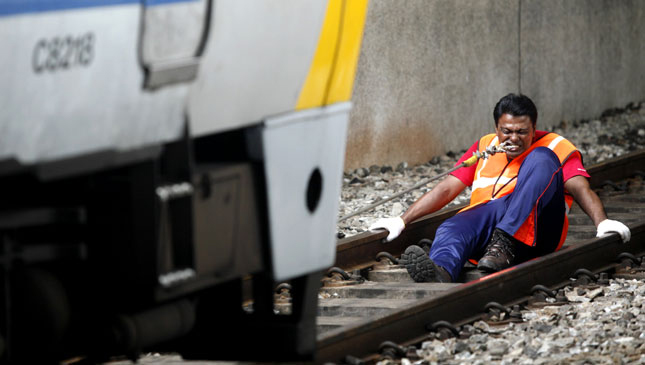 On August 30, 2007, the eve of Malaysia's 50th Independence Day, Rathakrishnan Velu (or Raja Gigi, as he is known locally) broke his own world record for pulling train with his teeth, this time with 6 coaches attached weighing 297.1 tons over a distance of 2.8 metres at the Old Kuala Lumpur Railway Station. Raja Gigi, from Tampin in Malaysia learned a technique of concentrating his powers to any part of his body from an Indian guru at a young age of 14. 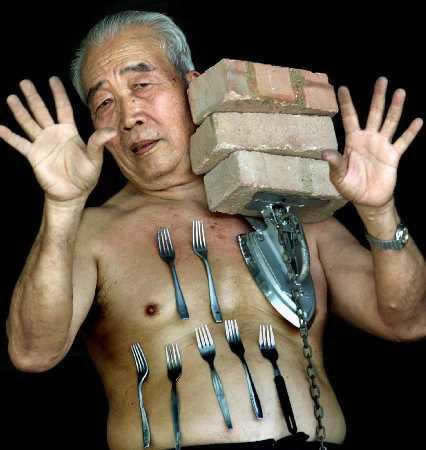 Liew Thow Lin, a 70-year-old retired contractor in Malaysia, recently made news for pulling a car twenty meters along a level surface by means of an iron chain hooked to an iron plate on his midriff. He says that he discovered he had the amazing ability to make objects stick "magnetically" to his skin, and now he's added car-pulling to his repertoire. After reading an article about a family in Taiwan who possessed such power, he says he took several iron objects and put them on his abdomen, and to his surprise, all the objects including an iron, stuck on his skin and didn't fall down. Since this "gift'' is also present in three of his sons and two grandchildren, he figures it's hereditary.

Animal behaviourist Kevin Richardson says he relies on instinct to win the hearts and form an intimate bond with the big cats. He can spend the night curled up with them without the slightest fear of being attacked. His magic works not only work for lions but other animals such as cheetahs, leopards and even hyenas do not hold a threat against him. Lions are his favourites and its a wonder how he can play, carress, cuddle with them whose teeth are sharp enough to bite through thick steel. Its a dangerous job but to Kevin, its more of a passion for him. 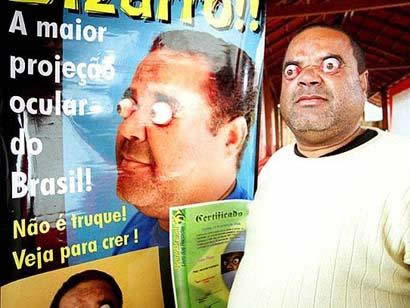 Claudio Pinto can pop both of his eyes 4 cm (about 1 and a half inch) or 95% out of their sockets. He's now aiming (poppin'?) for a world record. Mr Pinto has undergone various tests and doctors say they have never seen or heard of a person who can pop the eyes as much as him. Mr Pinto, from Belo Horizonte, said: "It is a pretty easy way to make money. "I can pop my eyes out four centimetres each, it is a gift from God, I feel blessed." 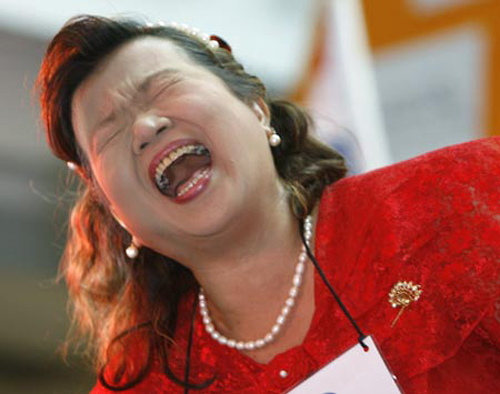 Pay attention fellas. You probably don’t want to meet Jittarat Wongsomboom on e-Harmony anytime soon. You think your girlfriend won’t shut up? Jittaratat won a contest laughing for 12 minutes and 26 seconds at a peak volume of 110 decibels. The amazing thing is, she’s still less annoying than the women on the view. 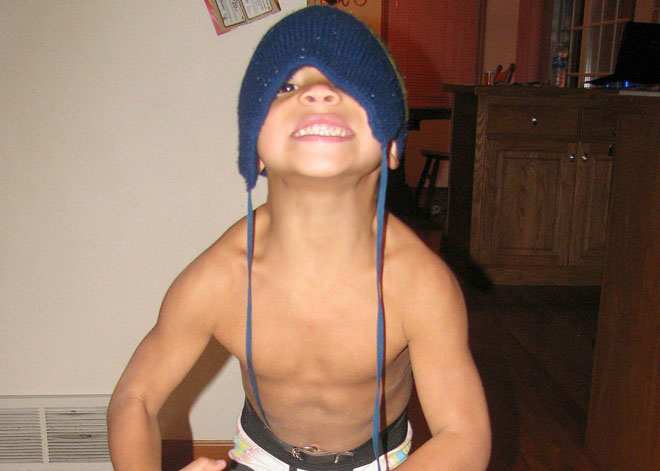 At first glance, Liam Hoekstra, looks like any other six year old. However, when Liam grabs a ten- pound dumbell and waves it around like a pillow, it becomes clear that he is no ordinary boy. Liam was born with a mutation that basically makes him as strong as an ox. When he was just two days old he could already walk, and at the age of three, he was as quick as an cat and could lift his parents sofa. Just imagine what that must have been like for the parents if they were watching tv on this very same sofa at the time this happened? Anyway, his condition doesn’t make him extremely bulky as you see with animals who have a similar condition, but his skeletal muscles are in fact 40% stronger then the rest of us mere mortals. So what is happening? Liam Hoekstra’s extremely rare genetic disorder called myostatin-related muscle hypertrophy, blocks the production of a protein called myostatin that normally limits muscle growth. While a disorder to some, others might consider his situation as being blessed like a millionaire, since there are no known downsides to this condition. Okay, he does have an incredibly fast metablosism which requires Liam to eat as least 6 meals a day, but that is a small price to pay for Hulk-like strength and never putting on any body-fat, ever! Liam might not be throwing minivans at bank-robbers just yet, but give the boy some time. He’s only 6 years old at the moment and nobody really knows how far his Hulk-like strength can go as he grows older and starts lifting weights. Therefore, it will be very interesting to see this super human toddler grow up by stopping by his Facebook page from time to time.

25 Creative and Amazing Pictures from around the world 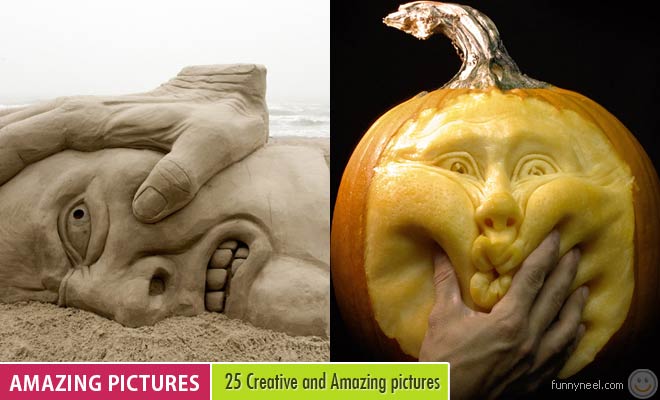 30 Most Amazing Upside Down Houses around the world 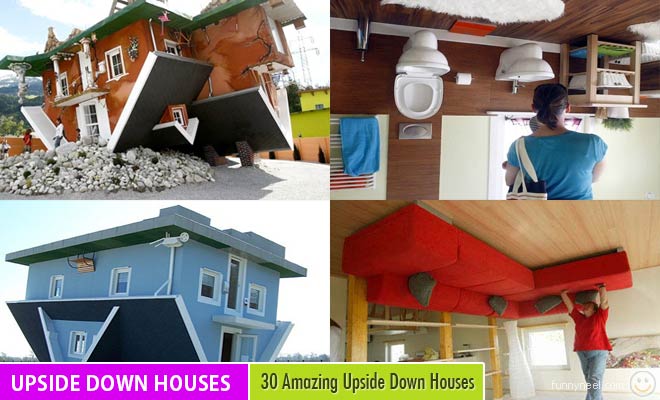 20 Amazing and Unusual shapes of Flowers and Plants Natures Gift 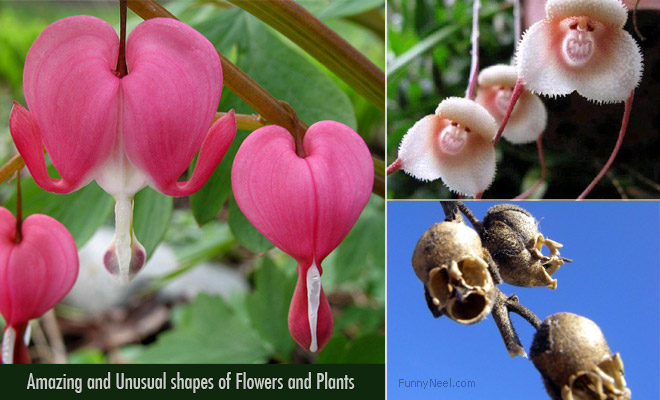 20 Amazing Modern Architectures and Buildings around the world 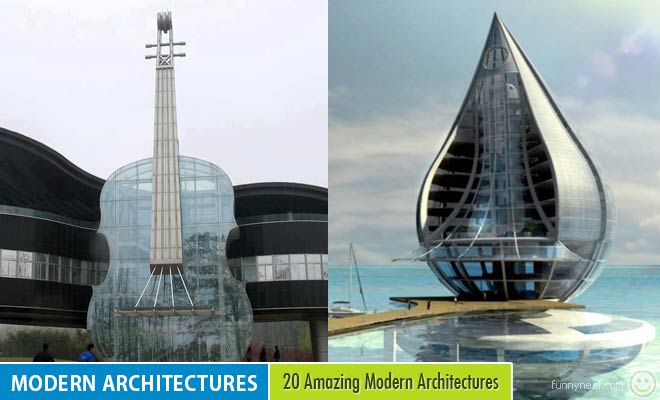